A couple years ago Will Payne, N4YWK was on a quest to graph some of the historic growth of repeaters. 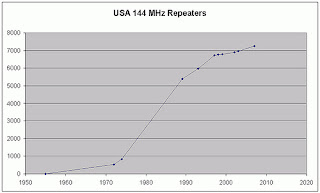 I helped provide some of the data for him. But more recently I wanted to take a look at 70 centimeter ATV growth. 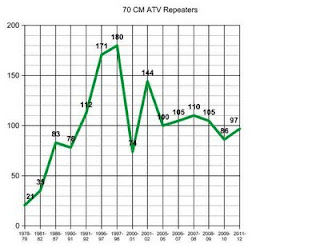 That of course lead to more counting as I wanted to look at the 900 MHz band in light of Alino's announcement that they intend to release a HT capable of 900 MHz. The DJ-G29T. 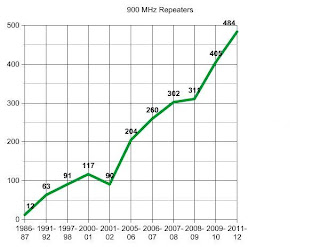 I think it's one of the still steadily growing bands out there that can be a lot of fun.

I had no intentions of buying a new HT any time soon, but the DJ-G29T is certainly changing my mind on that. I have wanted a frequency agile radio with a VFO for 900 MHz for a long time. I believe Alinco will be the first ham manufacture of a 900 MHz HT.
2 comments

A couple years ago on the D-Star gateway mailing list, it was discussed that the Icom G2 software was not impressive.

A few pioneering D-Star programmers (Scott, KI4LKF, and Jonathan, G4KLX, Hans, DL5DI, and others) discovered that callsign routing updates were sometimes taking upto 2 hours. These same guys ran into programming road blocks that the closed nature of the Icom/USTRUST/K5TIT trust that led them to the development of open source alternatives.

Jonathan Naylor, G4KLX recently created some statistics on the size of the ircDDB network against the USROOT based network. 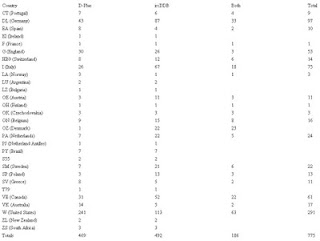 I feel that one of the reasons for this is that the ircDDB network is open, and encourages experimentation and open source. This is in contrast to the USROOT network where opaque and undocumented protocols are in use, yet some still stick to the Icom G2 system, claiming that it is somehow superior! Would these people claim that installing commercial software is more in the amateur radio spirit than home brew and documented software?

Just as an aside, take a look at http://www.va3uv.com/Vulnerability.htm.

Please feel free to distribute copies of this e-mail to anywhere you like, as long as you keep the numbers in the table the same of course.