A while back I blogged about how to listen to DMR using a SDR.  I tried to do the same with D-Star, but was having problems.  I ended up reaching out to the author.  He just released a fix, so if you download / install from now on, you shouldn't run into the head banging that I was. 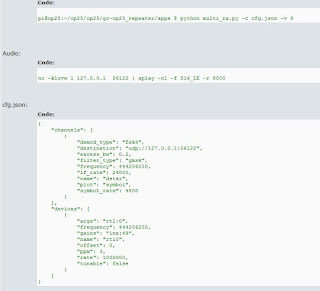 I am not going to lie, it doesn't sound the best.  There was no information for coder's to work off of, so what we have is rather crude, but intelligible.

If you are looking to help improve it, start here.  This is from the folks from the community that brought us what we have today.


There was also this tip from user "groovy"

If anybody wants to continue the research / work, I suggest you look at the osmocom GMR code that Sylvain Munaut worked on. Those phones use a similar codec - I believe with longer frames for the satellite latency. Initially he used the mbelib code, enhanced it for things like tone support, but he later rewrote the synthesis code completely. See OsmocomGMR for his presentations and source code.

Unless other developers take this on, DVSI releases specs, or you switch to a hardware-based decoder like the thumbDV, I don't see the dstar voice quality improving in the short term.

I'd love to see further work on OP25. More so on the transmit part (hooked to analog radio, perhaps using the MMDVM hardware/Arduino.   Anyone care to join forces with Max?

Perhaps an update to Johnathan Naylor's (2009) GUI Linux client that would decode and generate GMSK using a soundcard and interface to a radio with a 9600 Baud packet connector. ..

Email ThisBlogThis!Share to TwitterShare to FacebookShare to Pinterest
Labels: op25

A few years back I shared a video about ham radio in the future.  It's was from a 2012 webinar, where Chris Imlay W3KD and Ed Hare W1RFI predict and speculate what ham radio will be like in 25 years.

As the focus of my blog has been more of a modern ham radio theme, it seems appropriate also share an excerpt from Mike & Key Amateur Radio Club (Seattle) Newsletter (K7LED Relay) by Peter N. Glaskowsky K4PNG.

The video we saw at last month’s meeting, ARRL at 100 — A Century of Ham Radio, helped me to better understand the history of our hobby. It also got me to thinking about how amateur radio might continue to advance over the next 100 years.

I believe the key elements of ham radio’s future will be developed from recent history’s three biggest technologies: the personal computer, the Internet, and the cellphone. Each of these fields has much to offer us. I'd like to explain some of these opportunities and describe one possible vision of what we can achieve.

The evolution of the PC has shown us that microprocessor-based digital electronic devices are faster to develop and more flexible than those using fixed-function digital or analog circuitry. While most modern ham radios have some digital logic in them to manage buttons and displays, most of the RF and audio processing in these radios is still done by analog circuitry.


Even most of the so-called software-defined radio (SDR) products on the market are still predominantly analog inside, with digital processing only in the audio stages. While features such as noise reduction, voice processing, and simple digital modes are valuable enough, the full potential of SDR is achieved only in direct-conversion designs that digitize one or more bands with minimal analog processing.

Although there are several direct-conversion radios on the market, including commercial and hobbyist designs, it’s still early days for this product category. Many valuable features remain to be integrated, including features that will come from those other two fields: the Internet and the smartphone.

The Internet teaches us the advantages of packetized data. Packets let us route our transmissions through complex networks, share a single channel among multiple users and messages, and confirm error-free reception where desired.

The latest smartphones deliver high-fidelity voice quality similar to that of landline phones—but over radios, a far more demanding environment. They also feature full-duplex operation, which is more convenient for users and opens the door to techniques such as collision detection, transmit power minimization, and real-time band coordination. Whereas cellphone networks are controlled by one central authority, amateur radio operators work together to follow the guidelines of band plans they develop themselves, like those of the ARRL and the Western Washington Amateur Repeater Association (WWARA).

It may seem as though many of these technologies could use more of our limited spectrum for the same amount of traffic. After all, packets and control channels add considerable overhead, extra error-correction bits do no good for clear, strong signals, and it’s wasteful to retransmit a whole message when only a word or two isn’t heard.

But in truth, today’s amateur radio is terribly inefficient. How many times, on average, do you send (or say) “CQ” for each QSO you complete? How many calls do you hear, but not understand? And when nobody is transmitting, the frequency is still occupied. Our modulation schemes are far less efficient than digital methods. CW, which is one of our more efficient modes, uses about 100 Hz of bandwidth to carry 35 words per minute (roughly 30 bits per second) of information. With a digital modulation scheme such as 64-symbol quadrature amplitude modulation (64-QAM), the same amount of data would fit into as little as 5 Hz of spectrum... and 64-QAM is far from the most efficient modulation scheme known. Digital radios are also better at sharing one channel among multiple users, delivering the benefit known as statistical multiplexing.

There are dozens of other techniques used to improve the throughput and reliability of communications channels, more than I could possible describe here, known by terms such as 8B/10B, CDMA, DSSS, MIMO, NPML, PRML, RLL, Turbo, and Viterbi. Some of these methods are already used in radios, and some were developed for wired networks or even disk drives, but they’re all worth studying to see how they might apply to the unique requirements of amateur radio.

A common objection to the rapid adoption of advanced technologies is that they interfere with what 47 CFR 97.1 describes as “the amateur's proven ability to contribute to the advancement of the radio art.” It’s a rare amateur who can understand everything going on inside modern analog radios, never mind digital ones. It may seem as though adding more layers of technology will make it more difficult for amateurs to contribute meaningful innovations—but digital radios are simpler inside, and it’s easier to add new features with software than hardware.

Amateur operators used to lead the development of radio technology. It may take many years for amateur radio to regain technical parity with commercial interests, but I believe we can and will get there.

Opening up our hobby to technologies that were developed for computer networks and cellphones creates the potential for hams to attract interest and assistance from the companies that developed them. Intel, Qualcomm, and Samsung (to mention just three of the largest) employ armies of RF and communications system engineers, but few if any of these professionals work on ham-related projects because their employers see no significant profit potential there.

These leaders of the cellphone industry are aware, however, that they aren’t taking full advantage of the potential synergies available in large networks of smartphones. In a technology known as cognitive radio, smart radios cooperatively adapt to changing conditions and requirements. With the flexibility to try experimental new technologies and the pressing need to deal with the changing conditions of the HF bands, amateurs may already be making more rapid progress toward cognitive radio than commercial firms.

Similarly, while there is much talk of “cloud computing” today, rigidly hierarchical computer networks aren’t very cloud-like. Mesh networking technology, which is under active development here in the Pacific Northwest, is a great solution for amateur radio and may also be a better solution than the networks from which the public Internet is built. As amateur mesh networks become more sophisticated, their underlying technologies may transfer back into the commercial world.


Unlocking the full potential of amateur radio will require more than technology. The language of the law will have to change, too. The current legal framework dates back to the days of crystal-controlled radios, and creates unnecessary obstacles to improving spectrum utilization with smart, agile SDRs. The current prohibitions on commercial and encrypted content preclude using amateur frequencies for Internet access; reversing that stance would surely create tremendous new demand for ham licenses and radios. Such prohibitions still make sense in the crowded HF and VHF bands, but with tens of megahertz of amateur spectrum available in UHF, and over a gigahertz in the SHF band—where line-of- sight propagation means the bandwidth in a geographical area is practically unlimited—more accommodating policies could spur more rapid progress.

I’d like to show how all of these advancements could apply to amateur radio by sketching out a hypothetical future DX contest—using only technology we could deploy today.


As the contest opens, participants introduce themselves by broadcasting just one digital CQ call. Since everyone has a software-defined radio that simultaneously receives and decodes every transmission on every band, each station knows the call signs and locations of every other station within minutes. The stations spontaneously construct a distributed control system that calculates the ideal combination of long-range and short- range connections to maximize the number of QSOs on the network.

The best stations get the most points for completing their own QSOs and for relaying the QSOs of others. Instead of a hundred contacts per hour, each operator could make thousands.


True, some of the skills needed for this kind of contest aren’t the traditional ones, but they are unquestionably more relevant to the real- world needs for amateur radio. There would be very little difference, for example, between a contest and a disaster-response operation, except for the content of the messages. And bear in mind that digitally programmed and enforced band plans will keep digital radios from interfering with CW, SSB, and RTTY operations. The spectrum of the future will have plenty of room for tradition and progress.