Well it's been a while since I ripped on the ARRL. And since they are doing such a great job, you knew it wouldn't be long before you'd see something so non-professional (amateur) from me again.

I'd like to help encourage the development/documentation of a bi-directional amplifier for high-speed multi-media applications.

I was prompted when I read the ARRL Homebrew Challenge I said to myself, why encourage something that has already been done.

Since there are more non-part 15 overlapping channels on 3 GHz, 5 GHz and 900 MHz bands I would encourage it to be for either of those bands.

I haven't been able to make much head way in this myself due to a lack of access to the necessary development equipment.

In some of the open source development efforts that I have been part of, a bounty is often posted as a reward for something like this.

I'd like to take the same approach to this, as I am offering $40 to anyone who can document such a design in QEX or the like. I'd also like to suggest that anyone else interested in the development also consider a contribution to the bounty (aka up-the-ante).

The total bounty-pledges of course will help who ever steps forward in their design and development costs.

To clarify, I am not requesting production or kits, just someone who wants the challenge and has the know-how to create a working prototype and will openly document their design in QEX or some other publication.

Would it be possible to get a blurb in QEX magazine to spread the idea out to the more technical crowd?

Yeah, you guessed it, zero replies to my request.

And now some commentary on the HR 607 bill that has provisions to auction off a portion of the 70cm band.

I did my part and wrote to my representatives. While it would be a shame to lose this band, the lower half of the band is Very inactive. Around here the only part used for the most-part is 440-450 MHz.

The current band-plan that caves out the lower portion of the band for ATV and isn't bringing any real traffic/ use either.

Seems a shame that we can't setup a decent wireless (emergency) network, other than this pathetic Winlink business. Heck if we can't do it, sounds like that is exactly what the proposed Department of Homeland Security First Responder network is.

Time to move forward, else I have little desire to continue to write letters to try and defend spectrum that will just sit idle as it has been. Use it or lose it..... maybe the ARRL, TAPR and other "leaders" will one day realize they need to step forward and suggest some new ideas for the hobby to help not only "protect" the spectrum, but put it to actual use.

What I am reading is "When All Else Fails" ... we will build our own wireless network. Possibly a wake up call for ham radio?
3 comments 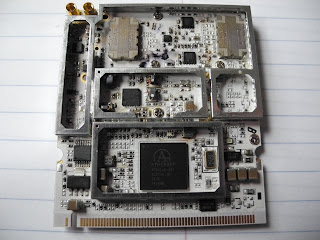 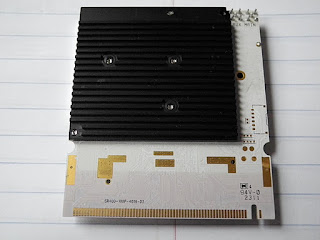 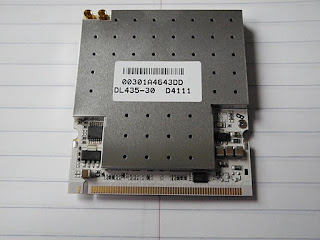 There have been some recent threats to the band with the proposed HR 607 bill.

So my logic to protecting the spectrum available to us, is to try and make better use of what we have, instead of letting it sit idle.

So following that logic, most of the lower part of the 70 centimeter ham band has been fairly idle. This is known as the Amateur TV sub-band (420-430 MHz).

So far there seems to be a fair number of hams interested in 802.11 based networks. But one of the big hurdles is understanding and overcoming the line of site, and other wide-band microwave propagation issues.

I've pointed out that 3 GHz is a great band since you won't be sharing the space with all kinds of other Part 15 unlicensed devices that inevitably lead to a higher noise floors and headaches.

The concept of HSMM on the 70 cm band intrigues me and others greatly because of the non-line-of-site possibilities.

I recently received an email from Jay Parikh with Doodle Labs mentioning he stumbled into this blog and was impressed by it.

He also wrote to bring my attention to a new product introduced by his company that would likely be of interest to the ham community.

Jay, mentions that they have already received a number of inquires from hams on it.

It appears Doodle Labs may be the first to consider offering a true non-line-of-site solution, capable of operation in the 70cm band that could easily fit into unused ATV channels between 420-430 MHz.


Doodle Labs has a new product which should be of interest to any amateur radio operator wishing to experiment with higher-speed digital data in the 70 cm UHF band. The Doodle Labs DL435 420-450 MHz OFDM Transceiver provides high-speed data in channel widths of either 5 or 10 MHz throughout the 70 cm amateur radio band.

The DL435-30 transceiver has a standard 32 bit, 33 MHz miniPCI interface and works perfectly with a Ubiquiti RouterStation. The RouterStation itself is powered via a standard power-over-Ethernet adapter. Note that the DL435-30 does have a fairly high current draw (around 2 amps) when run at http://www.blogger.com/img/blank.giffull RF output power.

The Ubiquit RouterStation or RouterStation Pro can be running either DD-WRT or OpenWrt. Note that currently OpenWrt doesn't allow manual selection of with channel width, so you may wish to try DD-WRT first.

The DL435-30 transceiver is based around the Qualcomm Atheros AR5414A baseband processer and a RF Micro Devices VCO and mixer. The DL435-30 transceiver itself "looks" like a standard 2.4 GHz 802.11g device in software, but the hardware is configured to provide a frequency offset of 2019.5 MHz. For example, if you select "2.442 MHz" in your configuration software the actual operating frequency will be at 422.5 MHz.

Transmit power offset is an additional +10 dBm. So selecting +13 dBm (20 mW) in your software configuration would give a final tx output power of +23 dBm (200 mW). The DL435-30 has an option for using diversity antennas, with one MMCX jack for the main antenna and one MMCX for the auxiliary antenna.

With a 1989.5 MHz frequency offset, a proposed channel plan from Doodle Labs is below.


However, Doodle Lab's normal business model is to work with OEMs. Doodle Labs is not set up to address small quantity purchases. They are also concerned that they may get buried with the support questions. Doodle Labs has approached a few resellers to see if they can do this. But they want to see the demand first before they carry the product. So this is like a chicken and an egg situation.

Sore that reason, I've held off blogging about this exciting new development for some time, but with some limited communications with both Xagyl and Doodle Labs it appears they are at least curious about what kind of amateur market there is. Or at the very least are okay with some inquiries.

{Update 3/20/11}
After a bunch of discussion, Doodle Labs mentioned they planned on releasing a model that specifically covers the ham spectrum. (see below)

So at this point, they are still trying on getting a distributor lined up, and will be in touch with me and others who have contacted them as soon as that is done in approximately two months.

He notes the delay is actually on their side. There are some minor changes that need to be made to the design and their design team is completely swamped at the moment with a few different customer projects.

Now if we can just find a OEM interested in selling this. Till then, Doodle Labs will sell factory direct.

Test applications were a Webcam video streaming program and a file download server program that ran on inexpensive netbook computers.

The test documented in his paper prove a sustainable data rate of  1 Mbit/s over 10 miles.