Many moons ago I dabbled with MythTV to record over the air TV.  It's an open source home entertainment application.  Then DTV came along and the tuner card hardware I had was going to need replacement.

Since then I have played with Kodi/XBMC, and OpenELEC on the Raspberry Pi.  But I am using this much like a Roku box, just to compliment my TV watching.  I often wish there was a modern DVR for over the air TV.

Recently when I was shopping the RCA DTA880 caught my eye.  A digital converter box with recording.  There is also the Ematic AT103B.  Both can record over the air TV to a USB stick.  This is awesome.  Neither however have a network jack, as it would be nice to be able to play back/record to a network share.  Another thing I wish it had was line input jacks, so you can record from an external source like a satellite.

Basically someone needs to combine these converter boxes with a Roku boxes for folks who are looking for options when considering dropping cable etc.

The Simple.TV boxes seem closer to what I am seeking as they are able to connect to the network. However they have a portal manged setup, and reportedly a Roku box can can act as a client to connect to the Simple.TV backend to stream live and recorded TV.   I haven't found a simple way to use a Raspberry Pi running OpenELEC or what have you to function as a client in a similar way.

The  Magnavox HD DVR/HDD 1TB ATSC Tuner has RCA inputs as well as coaxial for over the air ATSC.  But I don't really care so much for the price.  I'd rather add my own USB drive, so if it didn't have an internal drive, that would help the price a little.
0 comments

I just received a copy of this new book by Glen, KW5GP.  It worked out well as it was my birthday a week ago and I had that ARRL coupon to burn. 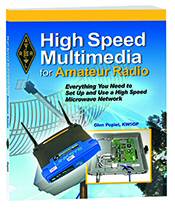 In the introductory first chapter it discusses Part 15 verses Part 97 operation.  It goes on to talk about peer-to-peer mesh networks (AREDN and BBHN), verses the traditional spoke and hub network, star topology (HamWAN).  Then it covers frequencies showing allocations on 2.4 GHz and 5.7 GHz, which channels overlap Part 15, and which are Part 97 exclusive.  Then a bit about TCP/IP in general an a quick history of the AMPRnet.

Chapter 2 is about technologies.  802.11b/802.11g/802.11n and its ham use regarding some regulatory information on DSSS and OFDM.  It then goes on to explain 802.11a/802.11ac.  From there it briefly talks about the two main ham firmware projects; AREDN and BBHN.  It later goes more in depth with the history of both and also explains HamWAN.

Chapter 3 talks about equipment. It starts off with the WRT54G, goes on the Ubiquiti, and Mikrotik. It covers connectors, feedline, antennas and brief mention of amplifiers.

TCP/IP for HSMM is the title of the next chapter.  It talks about it's history and again a brief mention of ampr.org.  Public IP space verse private, and goes on to break down the datagram explaining how it works before going on to explanation of the OSI model.  It covers network classes, subnetting, MAC addresses and switching.  Then it goes on to talk about IP routing and IP routing protocols, including static and dynamic routes, routing protocols like link-state routing protocols (OSPF), NAT and its downside, DHCP, DNS, and VLANs.  It also talks about the troubleshooting tools, like wireshark, traceroute, ping, etc.  A very thorough review on TCP/IP.

Chapter 5 is about Applications.  VOIP/Asterisk/FreePBX, IRC/HamChat/OpenFire/ClearOS.  It also covers Webservers, SMTP E-Mail servers, FTP servers, and network servers like NTP and DNS.  Later in the chapter it mentions and shows a webcam and the Raspberry Pi as a platform for such previously mentioned servers.

Security and Filtering is the next chapter. It starts with physical, goes on to firewalls and filtering showing how with ClearOS again.

Chapter 7 is titled "Backup and Redundancy."  It starts with power, recommending a UPS.  Talks about ESXi for virtualization, network monitoring; SNMP and PRTG.  It also talks about redundant links and atmospheric conditions.

Deploying is the next chapter. It tells you 2.4 GHz and re-purposed WRT54g's are likely the quickest and cheapest to deploy but warns you about congestion and network performance.  It talks about wireless path planning with SPLAT and Radio Mobile.  And explains the importance of Fresnel zones.  From there it goes on to explain how to install the firmware be that BBHN or AREDN.  And how to use and configure the firmware.  It also dives int deploying HamWAN and MiktoTik setup.

Chapter 9 talks about The Future of HSMM and how its in a constant state of change. "All of the HSMM development groups are not content to sit idle with what they have done, but instead continue to push forward and improve upon what they have already accomplished."  The author notes Ubiquiti gear offers the greatest flexibility for the future.  He notes AREDN firmware allows the use of 900 MHz, 2.4 GHz, 3.4 GHz and 5.8 GHz and expects that we will see all of the HSMM technologies moving to the Part 97 only portions of the band to reduce noise floors which is already a capability of the AREDN firmware.

I have to say I am impressed by the book.  And  I have been playing with this stuff before 802.11b was ratified, as I started with FHSS gear, so for the book to impress me should really say something.

Its the ham radio oriented complimentary book to  Wireless Networking in the Developing World.