Make better use of the bands.

The following is from the IARU Region 3, Seventeenth Regional Conference (Sept 2018) document.

"The evolution of spectrum management in the era of hyper-connectivity and its impact on the amateur service."

While the discussion above has focused on the 6 m band, one thing that the applications based method has revealed which is applicable to all bands is that we need to come up with applications (transmission modes) that use more, rather than less spectrum, if we are required to justify our allocated spectrum. More amateurs or more band activity would also help, but they are separate and difficult issues…

The move towards digital coding, a rising noise floor and internet reporting has driven us in the direction of reducing the bandwidth that we, as amateurs, use to communicate. The ‘JT’ modes are a superb example of very clever coding, allowing communications in very narrow bandwidths. They allow (usually limited) communications to occur in situations where conventional analog applications (modes) do not function. Similarly various digital voice modes generally use narrow bandwidths and operate in poor signal-to-noise environments. In general the direction of application development is to use less bandwidth and this leads to some questions:

- Why not consider developing modes that use more bandwidth, or at least are adaptive and can use more bandwidth when band conditions permit? Wider band modes offering better voice quality are certainly easier on the ear. Other information could also be transmitted which would enhance the communications experience. Reduced Bandwidth Digital TV is a possibility for UHF bands and above, possibly even on 6 m and 2 m. Acceptable video quality can be achieved using bandwidths of 300 kHz or less.

-How about moving away from our reliance on internet mediated modes, or at least supplement the internet with an amateur equivalent. HAMNET in Germany and Broadband-Hamnet in the US are examples of this. Why not use some of our spectrum assets to transmit amateur-specific and non-commercial information (DX clusters, WSPR reports, etc.) instead of commercial internet services? Considering that amateurs have exclusive use of the 44.xx.xx.xx IP address range (AMPRNet) we could build an independent, though internet-linked amateur-specific network. Given the low population density in many Region 3 countries an extensive broadband network using any of the microwave bands is unlikely to be feasible, but perhaps lower frequency bands could be used for (relatively) broadband links if the application data rate is kept low enough.

Acting upon some of these ideas, and other innovations, would increase spectrum occupancy and help justify the bands we have.


Basically this is the same thing I have been saying for a good number of years.

Now if we just had some leadership in this hobby that had a real desire to do something more than the status quo.

Paul, KB0P is sorta new to the Green Bay area.  He used to live in the Upper Peninsula.  He recently emailed me about setting up a DMR repeater back home in the U.P. (Ishpeming/Marquette).

He said a number of his U.P. ham friends have been getting on the air with DMR using hotspots as there are no DMR repeaters in the Marquette area.

Paul was writing to come up with the least expensive way to go this.  He already had an fairly unused analog repeater and a site etc.

I replied and informed him that a good number of the Motorola XPR8200/8300 repeaters that hams have on the air were graciously provided as refurbs from a ham who works at Motorola.  So Paul could reach to this guy, but these units have high PA failure rate.  A surge suppressor and isolator are highly recommended if you are going to use them.  And you'll want to crank the transmit power back if you are 24/7 linked to high transmit rate talkgroups like WW, etc.

With that in mind, and the headaches of having to swap the transmit and receive radios around when they blow-up (and it seems to be just a matter of time), I suggested he roll his own.

Paul has been in the hobby since the mid 80's I think, and I knew he had no qualms about using a soldering iron a service monitor.

I wrote, another option that might be better is MMDVM.  And I am note referring to that flea power hotspot junk.  I am talking about using an adapter like the INADVM MMDVM, or RB_STM32_DVM and using that to drive existing analog equipment.  As a bonus you'll be able to support all the other digital modes if you take the time to set them up.

A couple weeks later he wrote:

A new DMR repeater has now been installed in Marquette, Michigan (da U.P.). It can be reached on the U.P. Talk Group 31268. 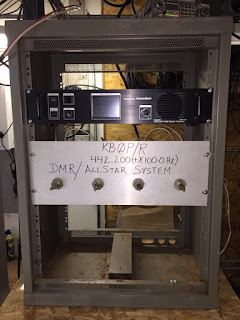 We converted a Yaesu DR-1X repeater to a DMR repeater using the STM32-DVM system by Repeater Builder consisting of a Raspberry Pi computer and a MMDVM Top Hat board, using the Pi-Star software.