The radio spectrum is a finite and increasingly valuable resource. Mobile broadband providers are willing to pay almost any price for access that they can sell back to the public. Yet, who can put a price on a community, devastated and cut off by natural disaster, being able to communicate reliably when normal channels have failed? What is the dollar value of a young person being inspired, by his or her hands-on experience as a radio amateur, to pursue a career in science or engineering? On a more personal level, what is the enrichment that Amateur Radio has brought to our own lives worth to each of us?

Think of how much we owe to those who came before us, who made certain that Amateur Radio would survive and flourish after they were gone. We can never repay them – except by doing the same for future generations.Every day, ARRL volunteers and staff work tirelessly to protect our spectrum access.....

In 2010 ARRL launched a newsletter, Spectrum Defense Matters, to keep members information on issues related to the protection of Amateur Radio frequencies.

But again it's really only a sales pitch to round up some extra donations. More importantly (to me anyhow) is how can we get more stuff on the air. How do we get hams out of the wood work, and get them to try new things?

Back in 2005 the HSMM working group prepared two recommendations for Board consideration:

-A new all-digital license scheme to attract Internet-savvy technical individuals to ham radio, and
-A frequency bandwidth plan that will allow for adequate digital development of Amateur Radio into the 21st Century.

Improving and Expanding Amateur Radio in the 21st Century

50 years ago, amateur radio service gave its licensees access to wireless voice communication services that were otherwise unobtainable and trained people for careers in industry. It should be doing the same for today's wireless communication but isn't. This is a proposal for a 21st century novice license oriented towards HSMM. It would change amateur radio somewhat, but would ensure its existence by attracting younger users and make it more relevant to today's technology. First, let me explain why new novice licenses are needed.

If license classes were organized by area of interest and new hams just picked the licenses that fit their needs, each license could better fit the interests of each ham. Rather than acting as an unnecessary impediment that is shrinking the ranks of the hobby, licenses could encourage new growth. Licensing that fits user needs could be more restrictive for HF spectrum where the number of users that can be supported is small and become less restrictive as the frequencies go up and large numbers of users can be accommodated.

Many amateur HF users prefer the traditional form of FCC regulation with highly structured bands and a Morse code requirement for their portion of the spectrum. The existing license structure largely fits their needs. However, hams interested in buying HTs and using voice repeaters face a lot of examination requirements that are unnecessary for their purpose. They should have a simpler license where they learn how to set up a limited station and agree to certain operating procedures and frequency ranges. This would encourage new membership and build the pool of emergency communicators.

Hams who want to set up repeaters or do high-power weak-signal communication on the VHF and UHF bands require more knowledge as they will be setting up larger, more complex stations. The current license examination system with an exam that stresses design requirements and RF safety fits these needs. However, a new license class for HT users would benefit the radio clubs setting up and maintaining repeaters by providing more members.

Those interested in computers and digital communication are under-represented in amateur radio ranks. They are technophiles as we are, but the current system does not serve them well. This is disturbing, as digital communication is the future. In particular, amateur radio should encourage the participation of those interested in software as all electronic communication now depends upon it. There should be a license class where they agree to certain frequency ranges and non-interference provisions. This type of license would expand the use of new technology, make the learning experience of amateur radio more relevant to ham's personal lives, increase the use of our microwave bands and allow the development of and experimentation with new high-speed multi-media applications. It also assists us in supporting public safety, health and welfare agencies during times of emergency as the majority of the information that must be communicated becomes digital.

This new license wouldn't be called a "novice" license (as that might discourage its use) but a "digital communication" license and would......

After consolidating to three license classes, I think a digital license class like what was presented is a great idea. I'm all for something radical in this hobby.

Ten years ago a survey conducted by the ARRL Technology Task Force, of League members and other amateurs revealed that the number one interest in new technologies was in high-speed digital networks.

Today, you hear nothing from the Technology Task Force. But still plenty about how the ARRL needs money, and how hard they are working to protect spectrum. (Note: TTF is in hiatus due to W4RI's retirement)

The economy is in the toilet, instead of money can we see some other ideas on how to protect the spectrum by encouraging new uses?

Most hams are probably not well experienced at operation at 900 MHz and above. Microwave propagation is a different animal for these folks.

Reading and understanding it and the expected path loss is one thing, and then real world experience is a whole another thing. You can then compound your confusion on expected performance by realizing that wide band spreading modes are yet another layer to the mix.

I built a simple analog 900 MHz repeater so that I could get a better idea of how signal propagation on the band. I was rather impressed. On the same token I was also impressed using the slower Aerocomm FHSS units on 900 MHz. But trying to draw comparisons between narrow to wide is a bad plan.

The XR-9 is a logical step for the average ham, with a modest tower. The versatility in data rates and ability to change the channel width from the default of 20 MHz spreading to a half-rate of 10 MHz and even a quarter rate of 5 MHz is ideal.

Overall in all the experimentation of wide band spread spectrum at 900 MHz and 2.4 GHz, from the Proxim Symphony, origional 900 MHz WaveLan, Ubiquiti Bullet to the XR-9, I feel the average ham will be mildly disappointed. (Also see David Rowe, VK5DGR's blog on Wifi is hard.)

All this stuff works great if you can get a central node/AP up high on a commercial tower. Not so great if you live in an established neighborhood with medium to mature size trees.

I have experienced the difference between 1 watt and adding a 10 watt BDA's on both bands. For the average ham, living in the city with a modest tower, this does improve things significantly, and provides something usable.

In light of the recent spread spectrum rule change, I would highly appreciate if TAPR would consider getting behind a BDA project.

I would appreciate if the ARRL would clarify how spread spectrum fits into the existing band plans on 902 and above.

To help things along here is a recent article I stumbled into detailing construction and theory on a switchless bidirectional amplifier for 2.4 GHz using circulators.

The theory can be applied to BDA development for less crowded bands like 3 GHz, 5 GHz or even 900 MHz. 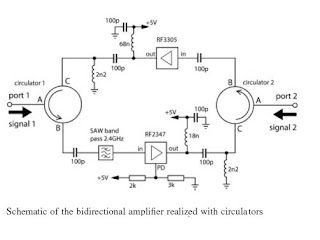 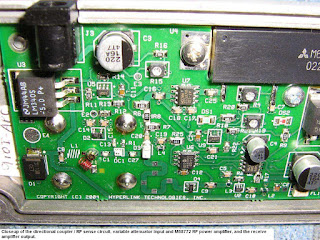 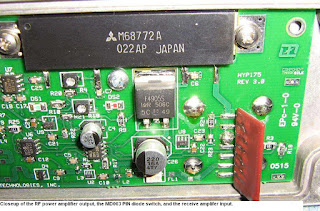 Below are some internal pictures of their 900 MHz 802.11 amplifier. Both their HA910I-APC and newer HA905I-DM are essentially the same.

The same variable attenuator input, M68772 RF power amplifier, and MD003 PIN diode switch. The newer model has much better heat dissipation, and runs at 12 volts in stead of 13.5 volts. So even the newer advertised 5 watt model is capable of more.

I don't like the idea of using Amplifiers on 2.4 GHz as the channels overlap and there is the potential to disrupt to many other users.  However there is a cheap amplifier 5-8 watt for that band, the EDUP EP-AB003 2.4GHz Amplifier for about $50-60. 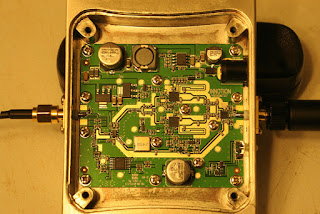 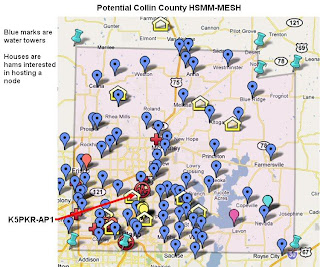 In Collin County Texas a groups of hams have been making good use of HSMM technologies to update their Amateur Radio Communications Health-care Emergency Services (ARCHES). This was traditionally setup of two meter/ 70cm voice and packet radios at 9 Austin, Texas area hospitals.

The setup provides key patient data to the City of Austin Emergency Operations Center, during significant incidents, even if normal communications are unavailable. It's highly successful. During every activation, patient data and other traffic passed more quickly and accurately than all other techniques tested during the activations.

The ARCHES program has been so successful, we have been asked to expand the system to ~ 40 additional area hospitals and clinics in central Texas.

Due to the existing significant number of packet collisions using traditional packet radio with just 9 nodes, they are migrating to HSMM.

With 40 or more packet stations in the area, passing packet data could slow to a crawl due to packet collisions.

The stations could only transfer data at 1200 baud, at best. Attempts at using 9600 baud showed that common radios do not pass 9600 baud data well. They distort the data so badly, that many resends are needed to get data through.The effective data rate seldom exceeds 1200 baud.

The HSMM proof of concept was demonstrated least year by AD5OO, NG5V, and KD5MFW who achieved a 10 mile point to point link across downtown Austin, Texas using only 35mw.

The Austin HSMM SIG has incorporated Optimum Link State Routing (OLSR) into custom firmware to provide automatic linking of radios that will be placed on Water Towers throughout Collin County Texas.

Email ThisBlogThis!Share to TwitterShare to FacebookShare to Pinterest
Labels: 80211use, ares, hsmm, mesh

There is an interesting HSMM/ Asterisk VOIP network in Spain:

Can you explain are in street language, What is Intended and this project will bring to ham radio and its benefits?

So we can all understand, a HSMM network is just one of many highway lanes that can move large amounts of data at high speed. What would be technologically wireless broadband network of high capacity in her ability to integrate all technologies: RF, VoIP, multimedia, data ....

What are the Objectives of the Project HSMMN?

Creating an information service of communications systems available by region, by using a geographic number to gain access from the fixed, mobile and IP (VoIP).

The whole process will be use Free Software.


Entities in the world of emergencies communications in Spain have shown interest in this project as an additional operational tool to consider for future medium to long term. Access from the PSTN will be in collaboration with guifi.net. This is an area open, free and neutral telecommunications network built through a peer to peer agreement where everyone can join the network

It looks like a nice mix of HSMM, Asterisk SIP and app_rpt technologies.

Alex Casanova EA5HJX, writes that he is working to develop a box that is a router (IP), and Asterisk (VoIP) and gateway with radio (analog and digital radio). Maybe this box can help in disaster like Haiti. Around the HSMMN´s Project we are investigate to integrate Asterisk VoIP with analog or digital radios.
5 comments