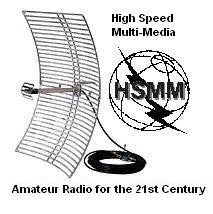 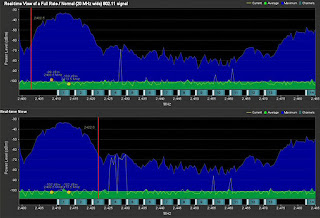 The Atheros Chipset used in some of the professional grade 802.11/Wifi products (like Ubiquiti) can support half (10 MHz) and quarter rate (5 MHz) channel widths. 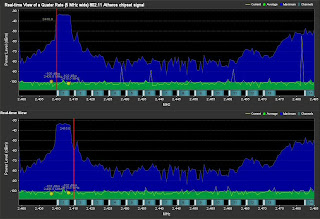 The open Atheros driver talks directly to the hardware abstraction layer (HAL), and is also capable of frequencies outside of the Part 15 band.

[For a while no open source HAL's existed that can let you do 5/10 MHz mode. You had to use MikroTik, StarOS, IkarusOS, DD-WRT and a few others for these modes. As of June 2010, it appears that 5/10 Mhz support seems to be implemented in ath5k now.]

You can see the feasible channel selection overlay here:
http://www.qsl.net/kb9mwr/projects/wireless/allocations.html
The channels in light blue fall into overlapping amateur band space. And are acceptable for HSMM operation.

As you can see you can squeeze seven 5 MHz wide channels below the first Part 15 channel on 2.4 GHz, two of which are completely outside of the Part 15 overlap. (Thus, should have quieter noise floors)

On the 5 GHz band, there are thirteen channels that are completely outside of the Part 15 overlap.

And even more interesting is that that within the Atheros chip it is possible for licensed developers to enable a local oscillator generation for a direct conversion radio transceiver. This is Not an open function, but irregardless, this is how 802.11 products on 900 MHz (Ubiquiti XR9), and 3 GHz (XR3) (as well as other places) are possible and on the market.

Open source drivers unlocked the possibility of additional frequency support. It allows programmers to be able to write a driver. In summary; Atheros has allowed a third party to create a layer between the low-level functions of its chips and high-level drivers via the madwifi/ath5k development.

So what about unlocking additional channels in other chipsets/hardware?

Broadcom is the the chipset of most common Linksys WRT54G routers.

Broadcom has for a long time declined to provide non-licensed access to it's chips. A project that has been working to reverse engineer access using legal means had released its first working drivers for Broadcom 4300 series chips a few years ago.

If you are into the nitty-gritty, a recently released (2010) Broadcom wireless driver seems to have structures which imply the PHY in the chips can be directly controlled to program HSMM channels.

For a slightly less technical overview of the various aspects of Modifying Consumer Off the Shelf Wireless LAN devices for specialized Amateur use, have a look here:
http://www.qsl.net/kb9mwr/projects/wireless/modify.html
I was recently asked my opinion about the use of Amateur Radio Networks like HamMesh, HamWan and BCWarn.

The question is pretty generic.  It all seems to stem from the ARRL HSMM working group from a number of years ago.  Despite that group falling apart, independently amateurs all over the place have embraced the technology.  It's great in my opinion.  As interest in voice  repeaters continues to wane, multi-media networks do make perfect sense.  These more modern types of networks have the potential to draw new blood into the hobby.  New hams who have software skills that can help the community with software defined radio and so forth.

Outside ham radio, as consumers were now live in a world where to keep thing interesting and new we have a flexible application space.  Be that apps on our phones, software on our PCs, and even firmware updates to our more hardware like devices.

That that has been notable absent in ham radio.  I.e. What it is when you buy it, is what it will be 5 years from now unless you want to totally replace it for the tune of several hundred dollars.

Ham radio used to be a good starting place for many who later entered broadcast and electronics careers.  Today those positions are few and far between due to disposable electronics and consolidation of engineers with mega broadcast groups.  What is the most notable/abundant "tech" career today is IT (information technology) work.

In my humble and simple opinion: These types of networks are long over due, and I am glad they are continuing to grow.  It helps ham radio stay relevant.

Jason Spence, KF6RGF writes that there is movement in the San Francisco, California area to build a HSMM network. He needs volunteers with access to towers to help build it out. More information can be found here:

The amateur radio service has a good chunk of the Internet address space (44.0.0.0/8), and it's not being used for its intended purpose: a worldwide packet radio network. Meanwhile, the rest of the Internet is crowding into the remaining address space and will no longer have any left in the near future.

The address space isn't being used because of a chicken-and-egg problem: the necessary digital repeaters aren't available for users, and there are no users to justify building the repeater network.

The cost of the equipment has finally come down to the point where even a modestly funded amateur radio club can afford to set up a small regional network by themselves. Through advocacy and standards development, Noisebridge is building a packet radio network modelled on the original vision of the Hinternet.

Members of Jason's group will be touring the SFBA ham clubs and giving presentations at their monthly meetings to gather the necessary volunteers.
0 comments

Email ThisBlogThis!Share to TwitterShare to FacebookShare to Pinterest
Labels: 80211use, hsmm

I've been backing off on the D-Star blogging. But here are a couple interesting developments that you'll likely never read about on any of WB9QZB's yahoo groups.

Hello to the group,

The gateway is now turned on and now we can play around with routing. But here is the catch.

The two D-Star systems that can handle routing are the US ROOT, which is made up of only ICOM and one Home brew system; and the Multi-Trust Servers that the Europeans built with the help of a few here in the US. There system is made up mostly of Home Brew and some ICOM systems. Of course the DARPA gateway (KJ4NYH) is built under home brew network (Multi-Trust Server). So with the new routing scheme we can now route to US root or anywhere else that has the same system.

More US gateways are joining this new routing method because it’s faster than the US ROOT routing.

So what can or where can we route to? Well you can route repeaters/area gateways and also call signs that are placed in the UR Field, i.e. W4AES is the gateway for Orlando, FLA so my UR field will look like this—> /W4AES C.

Give it a try and see what will work. Just check out the dash board and look for US calls.

And here is a good video overview from Michael, VK5ZEA demonstrating it.

The second, is a note from Ramesh, VA3UV on his Free Star* Project.

I started working on a project called 'FREE STAR*" about a year or so ago. FREE STAR* was an attempt to build a vendor neutral digital communication network and allow bridging between various VoIP protocols that are in use amongst radio amateurs today (app_rpt, IRLP, D-STAR, etc.).

I'll keep this brief - further info can be found on my website:

We have built a few systems on top of our Allstar / ACID boxes, they seem to work well.

He started it to provide webspace to help further the abilities and interest of the Amateur Radio Community.

There is a tremendous wealth of information hosted on the pages of QSL.net

About a year ago, Al retired from offering these services, and turned over these systems to Scott Neader, KA9FOX.

I encourage you to take a look at what is all hosted on QSL.net and consider sending an email to K3TKJ, thanking him for all his years of work. And consider a sending a donation to KA9FOX to help ensure that the tremendous amount of resources is available to the amateur community for many more years to come.
0 comments

Chris Paget, KJ6GCG has over a decade of experience as an information security consultant and technical trainer for a wide range of financial, online, and software companies. Chris' work is increasingly hardware-focused, recently covering technologies such as GSM and RFID at venues such as Defcon and Shmoocon.

At the recent Defcon 18 conference he displayed a spoofed GSM cellphone tower using a Universal Software Radio Peripheral (USRP) transmitting 25 milliwatts, to present a GSM air interface to a standard GSM handset and uses the Asterisk software PBX to connect calls. The combination of the ubiquitous GSM air interface with VoIP backhaul could form the basis of a new type of cellular network that could be deployed and operated at substantially lower cost than existing technologies in the developing world.

FCC rules aside, this is some powerful stuff. Imagine being able to restore cellular coverage in a disaster area using the foundation he has laid.

You can read more here:

Here is a video that shows a test call being placed from a softphone talking to an Asterisk PBX in conjunction with GNU radio and a USRP to create a Part 15 signal level call to a cellphone.


Here is a similar project which modifies android phone to use asterisk running on something called a mesh potato. This would be great for developing areas. Just drop some of the MP's with a battery and a solar cell and poof... a phone system.

Another favorite is using asterisk with amateur radio and repeaters