Here is something that I wrote for my local ham radio club.

Ham radio operators have long been some of the original open source , Do-It-Yourself (DIY) proponents.

Going back in time, radio stuff was expensive and out of the reach of a lot of hams. So they invented newer and mostly cheaper ways of doing things. They also came up with better ways of doing things because somebody else would see that idea in print and improve upon it. Of course the technology was rather rudimentary, and there was little way to go but up at that point in radio technology calendar.

What most people tend not to think about is the open-source nature of Amateur Radio. While operators most often are seen working in emergency situations, many of the modern conveniences we have today—cell phones, satellites, wireless devices— were developed and tested by radio amateurs.

Decades ago, amateur radio operators were on the forefront of scores of technological innovations, including television, digital communications, solid-state design and cellular networks. The hobby's roots trace back to radio pioneers such as Guglielmo Marconi and FM-inventor Edwin Armstrong.

Well a lot has changed over the years in society and ham radio. Many amateurs have gotten away from these "do-it-yourself" roots. But those types are still out there!

"The American tradition of tinkering -- the spark for inventions from the telephone to the Apple computer -- is making a comeback, boosted by renewed interest in hands-on work amid the economic crisis and falling prices of high-tech tools and materials.

Engineering schools across the country report students are showing an enthusiasm for hands-on work that hasn't been seen in years. Workshops for people to share tools and ideas -- called "hackerspaces" -- are popping up all over the country; there are 124 hackerspaces in the U.S."

In 2005 just shortly before the economic mess stated to unfold, Make Magazine was introduced by O'Reilly Media. It focuses on do it yourself (DIY) and/or DIWO (Do It With Others) projects involving computers, electronics, robotics, metalworking, woodworking and other disciplines.

The magazine was well accepted by engineering and electronics students. And led to the first Maker Faire. An event filled with DIY projects, science, demos.

These "fests" are now in their 6th year, and being held in California, Detroit and New York and many other places.

As mentioned in the Wall Street Journal article, regional groups are popping up all over the place to help support this innovation. These are referred to as Makerspaces/ Hackerspaces. They are places where people with common interests, usually in science, technology, or arts can meet, socialize and collaborate. A Makerspace can be viewed as a community lab, machine shop, or workshop where people of diverse backgrounds can come together to share resources and knowledge to build/make things.

There are two that I know of in our area:

If you still have a bit of "amateur" in you, I encourage you to branch-out and check these innovative groups out. I think there can be / should be a lot of crossing over and sharing of talents between some ham radio folks and these groups. These are the types of people that need to welcomed with open arms into the hobby.
1 comments

Email ThisBlogThis!Share to TwitterShare to FacebookShare to Pinterest
Labels: diy 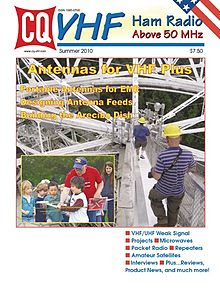 I announced about a week ago via twitter that I have been working on an article index for CQ-VHF Magazine. At thing point I believe it to be a complete article index since the magazine went quarterly in 2002.

As I explain in the index; "most of my interests lie on VHF above, and having acquired most of the issues since the publication went quarterly, the CQ VHF indexing became a new project."

You can view it here: