It's a far cry from a comprehensive survey, but it's a start.

Vote in all or even just one of the QST QuickStat polls below. We'll publish the results in an upcoming issue of QST (look for the QuickStats page in the Table of Contents).

This months questions include CW and ARES!

Results from this QuickStats poll will be published in the March 2011 issue of QST on the QuickStats page, located in the rear advertising section of the magazine. Along with monthly poll results, QST QuickStats offers colorful charts and graphs that highlight interesting Amateur Radio statistics.

Another way to help fine-tune the League is by letting them know your favorite articles in each issue of QST magazine.

This survey has been around a while longer. I discovered it about a year ago.

I'm encouraging all ARRL members to vote more often for the articles you like. We won't change the whole world, but at least we can make a point to speak up.

I also noticed this, which I think is a good idea:

The ARRL is sponsoring its first-ever video contest! We are looking for ARRL members to shoot and submit videos that showcase how fun and electrifying our hobby is!

So, maybe they do listen. I remember grumbling about the ARRL Homebrew Challenge not promoting anything new.

Here is another idea for the league. Perhaps if you feel the same way, you can make youself heard on this too.

Back in January 2008, the Senior Discount (65+) was eliminated for ARRL Membership. Citing risen costs.

Fact is seniors now make up a huge proportion of the membership, so discounting them is a huge drain.

I wonder if the League has considered extending a discount to hams under age 25, or those enrolled in a relevant schooling. Sure couldn't hurt the hobby could it?

I speak from experience, as I was lucky back in 1997 to be a recipient of a Foundation for Amateur Radio scholarship that I applied to my college electronics schooling. And I am still active in the hobby, including helping helping elmers, now in walkers, get to the store. lol!
2 comments

It was very sad to read the passing of John Champa, K8OCL. He was former Chairman of the ARRL HSMM (High Speed Multimedia) Working Group. He was also the High Speed Multi-Media Radio Contributing Editor for CQ VHF Magazine.

Unlike most hams he had a high level of energy and ambition for his work on HSMM and in other areas of the hobby not well explored.

I am beginning to sound like Wayne Green with my ARRL critical comments.

But hey, they led me on, to think there was some sort of Microwave Bandplan changes in the midst. Truth is, I am not sure of the status if this, and can't get any real answers from the league.

Regardless if these jokers want to live in the past or not, here is an interesting thing to consider:

Of the above, over 99% of hams use a tiny fraction (0.3%) of the total ham frequency allocations while the remainder of our available ham allocation is essentially ignored. By the way, ARRL said that as of 4/2010, there were about 688,500 personal ham radio licenses in the USA. If only one percent of these were microwave users, that would be 6885 hams. We often hear that the majority of licensed hams are inactive. How many microwave experimenters do you know?

The realization occurred I was just a Technician over 10 years ago was that wow, there is a lot to explore and learn in the Microwave arena.

Since then I have learned a lot and found it absolutely critical to have that under your belt.

I remember reading the HSMM partnership with the North Texas Microwave Society when John, K8OCL moved to Texas. And have to concur that is a great idea.

Since the ARRL has been so quiet, I have decided I need to do the same. But I will be supplementing my blog space with more technical microwave experimentation articles in hopes of helping spur others on.

Since the mid-90's when I got into the hobby I have been connected to a then- high-school technology club. Ever since the same basic group of now 30's aged guys get together to shoot-the-shit, complain about the ARRL :-) and most importantly see what we can build.

What you will notice from my future blogs is that there have been few HF related projects, and many microwave. As it should be.

It's a shame the ARRL doesn't understand simple math. There is far more to lose in our microwave spectrum than HF. Because there is tons more of it, and hardly any hams use it, and the commercial squatters actually see it as useful spectrum.

Hmm, if only we could do more than throw money to protect spectrum. Perhaps the following microwave projects could be QST material to help foster so actual use? Naa.. that is right we don't want to make anyone smarter. I am a believer that if ham radio is to evolve, then QST needs to. The concept that QST needs to continued to be watered down just doesn't stick with me.

The Proposed NTIA "Fast Track" Spectrum Reallocation shows that our 2.3 and 3 GHz allocations may be endanger. So to start off here is a 4 watt power amplifier for 2 GHz.

Email ThisBlogThis!Share to TwitterShare to FacebookShare to Pinterest
Labels: microwave 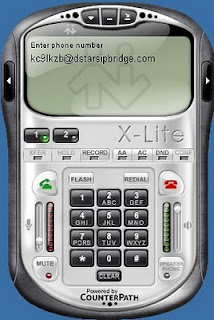 This was the subject of a short thread on the dstar_digital yahoo group started by David, KC2WNW.

I chimed in and mentioned that there are several SIP/VOIP apps out there. For desktop computers as well as Ipods and Smart Phones.

As long as the client can support a non numeric SIP addressing scheme, I really think this is a do-able idea.

I've mentioned the idea before as well has John, K7VE who first shared the concept with me.

A validated user account on a D-star to SIP bridging site would have to be established. You'd program that into your SIP phone client app. From there you could connect to a remote D-Star system using the SIP address convention
sip://kb9lkzb@dstarsipbridge.com, etc.

The Asterisk radio guys have their own custom application that has a software PTT. Or you can set DTMF digits to control the PTT. Much like how the CAT controller phone remote function works. When you press 1, the this enables transmit (and a soft steady tone is fed back to the phone user while they are in transmit as a reminder), and 2 to go back to listen mode.

While not as elegant as a custom App with a software PTT button, this approach ensures compatibility with any standard SIP phone with this age old phone patch dilemma.

I use MIXphone/MIXVoip on an Ipod touch to connect to my own Asterisk phone and analog radio system. But it doesn't look like it supports non numeric SIP dialing. However, I am sure there is one that does.
0 comments