Back when D-Star was new to ham radio (around 2008), Satoshi Yasuda 7M3TJZ/AD6GZ, created a DV adapter.

He also created the first GMSK node adapter.  The node adapter was more well recognized, as a way to retro-fit analog radios to become hotspots and repeaters (entry points) into the D-Star internet linked network.  Now a days this has morphed into the well known Pi-Star, using much lower power integrated transmitters.

But lets go back and revisit the forgotten and overlooked DV adapter. 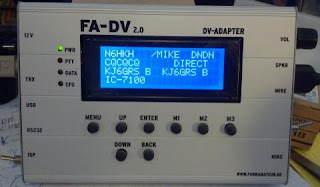 Shortly there after Jonathan Naylor, G4KLX crafted one of his first software projects.  A D-Star client that created all the underlying GMSK signalling with a sound card/FOB.  Much like Satoshi's adapter this too interfaced to the packet radio port of an analog radio.

The difference here between these ad the node adapters/ Pi-Star, is that these you plug microphones into and talk into directly rather than a something you use as a passive gateway device with a HT.

Since a number of efforts to create a true HT that does more than one digital mode still haven't come to fruition (like the DV4mobile, CS7000, etc), this is something the ham community should take another look at and work together at.

This time around, rather than the big user interface and display, all that could be served over a web interface to your cellphone over wifi or bluetooth.  (much like the VGC VR-N7500) So just think a magic box, that has a microphone and a 5 pin mini-din to connect to your existing analog rig.

The mode, D-Star, Yaesu Fusion (YSF), P25, or NXDN as well as userid, and talkgroups could all be selected over the web interface.

Doug, AD8DP is working on something of this DV adapter nature.

There is a great starting place here for someone, thanks to the work of Max, KA1RBI.

If you know of other similar developments please contact me.  I feel this is an area we need to be putting some focus on if we ever want to true multiprotocol radio.