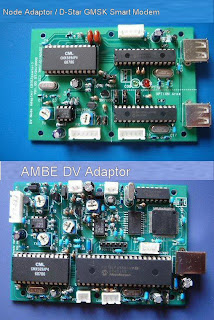 Satoshi Yasuda, 7M3TJZ/AD6GZ, has two different constructions projects available. The one that is the main focus of this yahoo group - the node adapter - is basically a GMSK smart modem tailored to D-STAR.

He began by looking into the UT-118 works. It is entirely of his own design. Mr. Yasuda is/was a member of the D-Star standardization committee.

The main component is the CMX589A GMSK modem chip. The same chip used in many
of the Icom radios.

Probably the next most important chip is the 18F2550 PIC that runs his firmware.
This takes care of formatting/ recognizing the actual D-Star protocol, USB
communications etc.


More information can be found on Satoshi's web site.

Mark, KB9KHM uses his node adaptor in simplex mode with his D-STAR Hot Spot software that Mark wrote to provide a simplex RF point of presence to the D-STAR network. (He uses his D-Star HT with the adaptor hooked to an analog radio's packet port to pass D-Star digitally to a gateway server over the internet.)

In this video, Erik Finskas OH2LAK, of Finland shows his D-Star Hot Spot / node adaptor while holding a QSO:

And here is a slide-show overview of the GMSK Node Adapter:


In a later revision of Mark's hotspot software he added a routine that provides a way around the combination problem repeater mode and linking. Now you only need one pic, as the data received can be sent back out like a loopback, while still keeping a data stream to external D-Plus gateways.

His AMBE DV adaptor on the other hand is a full blown adapter to turn an analog radio in to a D-STAR radio and does include provisions to encode/decode AMBE.

In this video Peter, DJ6ZR/AI4UE and Don, WD4CWE test D-Star on 6 meter and 10m with the Satoshi DV Adapter. With more info at http://dstarradioclub-international.com/default.aspx

Satoshi's AMBE DV adapter does decode and encode raw D-Star tailored GMSK unlike the the DV Dongle that Moe, AE4JY and Robin, AA4RC have in production.

Satoshi's does seem better suited for the D-Star to SIP translation project that is being investigated.

Peter SQ1BHQ - has got the adapter working with this Yaesu 857D