Dubus is a quarterly magazine for technology, construction, DX and propagation on VHF/UHF and Microwave bands. It is edited in English and German languages by an international group of hams, printed in Germany.

I have blogged a few times before, on how the amateur microwave bands are so seldom used, and are our greatest allocation, as well as potential area for new development.

The problem is for the most part, the microwave bands sit idle, except for a few contests a year. Dubus is mostly what you'd expect, hams building microwave stations for the quest of a contact record.

I have never been that type, to each their own.

I am more interested in building infrastructure or something a number of hams can use. Which is why I like data networks, as I feel it can support a variety of applications while keeping some constant use of the frequencies.

We report a 63 km high-speed IP connection on 5760MHz using ICOM ID-1's and modified transverters, UTV5600BIIP. The throughput was measured as about 100 kb/s at the application of layer .

Here are the details.

On the 29th of October, 2006, Hiroyuki, JH1UGF moved to Mt. Toogasa (altitude about 900 metres) and Tsugno, JN1AYV stayed at home in Chagasaki, Kanagawa for this experiment. The distance was 63km and both of us were within the line-of-sight. We used the same systems as follows. Our 1295MHz, digital transceiver was ICOM's ID-1 . To up/down-convert frequency, the 5760MHz transverters UTV5600BIIP were employed but some circuits were modified for this experiment. Since fast T/R switching is quite important, we removed the coaxial relay and added a circulator instead, as shown in Fig.1. In addition, two anti-parallel diodes were Inserted at the RX front end in order not to damage the preamplifier. These diodes cannot be seen In Fig, 1 unfortunately . The driver amplifier is MGF0904A and the final amplifier is 2xMGF1302, which outputs about 1W. We used a homebrew 25cm dish antenna with a horn radiator. Its gain was 25dBi. 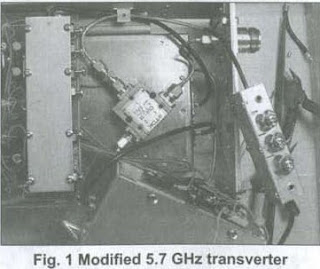 We started our experiment. The voice QSO on FM was quite successful, RS 59+, as the distance was short enough . Then, we switched to direct digital mode for IP connection but the result was poor . Using a ping command of MS-DOS, Its connection rate was lower than 10%. Considering the multipath effect, we changed the frequency and/or antenna direction, but in vain. Lastly, Tsuguo moved his entire system , which was initially set in his room, to a balcony. Tsuguo had thought the experiment would have been successful even through a glass window since they had been within the line-of-sight. We got 100% ping connection after this trial. 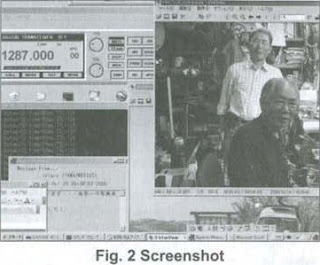 Then we tried an application experiment. Using IP Messenger (IPmsg) software, Hiroyuki loaded an Tsuguo's image file into the Hiroyuki's PC. Look at our evidence of Fig. 2. The front is Hiroyuki and the back is Tusguo in the inset photograph. The 90KB file transfer took 6 or 7 seconds and, then, its application-layer throughput was calculated to be approximately 100kb/s . We learned that any thin obstacle in the path might make the multi-path interference at high-speed data communication. We would like to make the distance longer and to make the throughput higher in future.

What I did pay attention to in this article was that for the fast T/R switching they used circulators. I am not sure why this never occurred to me. I noticed this concept in 2006 Microwave Technology Letter, titled "Switchless Bidirectional Amplifier For Wireless Communication Systems."

So far this is the only microwave data application I have read in Dubus. I find that a bit odd, as there is a huge microwave data radio network in Germany and Europe.

If anyone else knows of good reading in these areas, I'd appreciate a note. 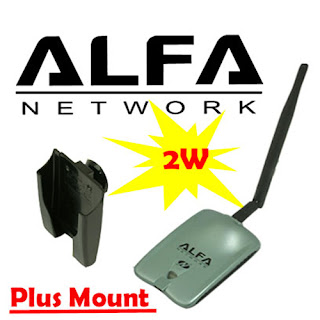 I've tried it with several, including a 1 Watt unit with option for an external antenna. (http://www.amazon.co.uk/gp/product/B003JTM9JY/ref=oh_details_o01_s00_i00?ie=UTF8&psc=1) . It is worth adding that to power the 1 watt dongle you need a version 2 PI, and a pretty high current PSU.

As there seems to be quite a bit of interest, I've put together some preliminary installation instructions. More technical info, build detail, etc will follow.

Download latest Rasbian image from http://www.raspberrypi.org/downloads and write to an SD Card in the usual way. (2GB is enough, but larger can be used). Leave card in PC.

Open the boot partition of the SD card, and copy all the files and folders from meshautoconf0.4.3 into it.

Unmount the SD card, install in PI, and power up, If you have a monitor it is worth connecting it so you can see what is going on.

The files are set up to work the same as a WRT54 node - the LAN port is configured as 172.27.0.1, with DHCP enabled - so you can connect a PC and configure the node in the usual way (web browser to localnode:8080). Sometimes I've found the PC doesnt get an IP address the first time. If this happens, rebooting the PI should fix it.

I've found it easier to configure the LAN port with an address on my LAN, so I don't have to unplug the PC and connect it to the PI. You can edit file "interfaces" to set an address on your LAN instead of the 172.27 address. If you do this, remember to set the same address when you configure the Node. or you will loose access. You'll need to connect to the IP address:8080 to configure.

(Footnote: The userid/password is the standard HSMM-MESH root/hsmm)

KK6DCI also has a project for building a BBHN node ("Broad Band Ham Net", the new name that replaces HSMM-MESH) on a RasPi at https://github.com/urlgrey/hsmm-pi. It has been used with a 1 watt Alfa AWUS036 USB wireless adapter (using the aircrack-ng driver for the rtl chip in the Alfa).

So what is the advantage of rolling your own this way, you may be asking?

The real advantage is that you can drive a cheap, relatively high-power USB wireless device, like the 2 watt Alfa AWUS036NH... Also the Alfa devices use the Atheros chipset, instead of the Broadcom chipset used in the WRT54.. devices. Atheros devices can be programmed to work outside of the normal Part 15 overlapping channels.

In addition utilizing different supported-rates, you can take advantage of the different channels with minimal or no overlapping. You may also be able to fit a ham only channel in in band segments not shared with Part 15, resulting in a lower noise floor.

The WRT54 and other embedded devices have a limited amount of on board memory and processor power. This is not an issue if you roll your own using a Raspberry Pi. The Pi will also be able to easily support many running services, like FTP, IRC, etc.