Over the air D-Star to Asterisk- not far off 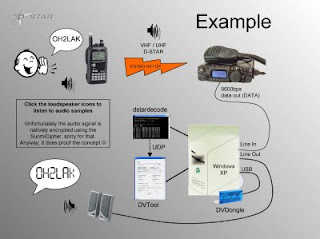 Erik, OH2LAK shows in this PDF how to use Jakub Hruska's D-Star decoder program in conjunction with the DV Dongle to receive D-Star audio off a analog radio using it's 9600 baud discriminator port.

Jakub's program is windows based and doesn't appear to include his source code. My hope is he will work with Scott, KI4LKF who seems very talented at programming so there can be some code convergence to help make a more stream-line way to decode the AMBE audio and map it to an Asterisk platform.

Scott already proved the Asterisk guys wrong. They reasoned that after you decode D-Star audio into 16-bit, monophonic, 8 KHz, SLE data, it would be impossible to encode it into ADPCM or u-Law or GSM or just LINEAR because it would become un-readable to IRLP or Asterisk or Echolink users.

This is interoperability at it's finest. An example of amateur radio working towards convergence with the real world. Typically it seems were are continually trying to set ourselves apart.

What a great display of what amateurs can still do, working together.

The sky is the limit with ham radio. The FCC rules that govern us were crafted in a way that allows us freedoms to do such much more than an channelized radio service, like the personal radio services, FRS, GMRS, and CB. The amateur service was crafted for those interested in radio technique self-training, intercommunication, and technical investigations.

If ham radio seems dead or boring in your area, it's probably time to consider an interests survey in your club. Amateur radio is a multi-faceted hobby, so if the same-old, same old has wore thin, never fear there is likely another area you and your fellow club members can explore.

Most clubs have a quick interests survey are part of their membership form. The purpose is to help the club officers identify what the membership as a whole is interested in. If you're club is at a cross-roads for equipment upgrades or happens to have a surplus in the treasury maybe it's time to invest in some new community equipment resources. And if you don't have the money in the treasury, what a perfect reason to unify and help with a club fundraiser.

Remember what a club does or doesn't do, has a heavy impact on the individual ham radio activities in an area. Ask yourself; what do and your fellow ham want ham radio to be or being doing in 10, 15 and 25 years? A large part of this will be defined by the infrastructure and resources a club sets forth to the ham community in that area.

Have you ever wondered why more ham manufacturers don't make the firmware flashable like everything else is these days? That way when there is a bug, or a need for a feature they can fix it or add it without having to recall the radio. The ability to update the firmware so bugs that become apparent in use can be fixed.
The ham manufactures tend rush their products to the shelves to beat the completion to the punch. However many times firmware bugs are discovered on the release of radios.

Yeasu and Icom are a good example of this. For example; some of the early release popular FT-8800R mobile radio had an audio problem that cropped up after using it in crossband mode. The work around was to power down the radio after exiting the crossband function. Many people sent their radios back in to have that firmware bug fixed, as do many owners of many other radios.

Two of the new Kenwood's apparently can now be flash upgraded in the field. (Amazing... Finally a ham manufacturer did that!)
http://www.kenwood.com/i/products/info/amateur/software_download.html

Flashable firmware also opens the door to later feature enhancements. For example the FT-8800 also lacks a CW ID for crossband, and something like that could easily be worked into a user downloadable flashable update. Or the new D-Star compatible IC-2820 that has reported audio and callsign display firmware bugs.

So I don't know why any modern design wouldn't use flashable firmware. One would assume the issue is cost. It's a much less expensive to do upgrades when programming faults and misdesigns happen if you ask me.
1 comments

Email ThisBlogThis!Share to TwitterShare to FacebookShare to Pinterest
Labels: firmware 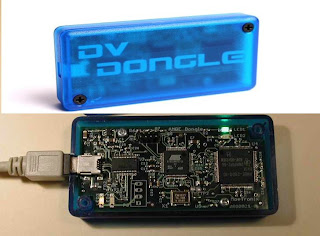 If you have been following my blog you probably say my piece on interoperability strides and my other piece on this second roll out of D-Star called NXDN.

This interoperability thing as you can imagine is pretty important. The key problem stems from a lack of standards but it really has to do more so with the fact that technology is developing so quickly that it's difficult to get everyone on the same page. Technology standards seem to be set by who can develop something first and obtain the largest market following. Just look back at VHS vs Beta, Blueray vs HD-DVD, etc.

As pointed out a common interconnection that both P25, and D-Star developers are choosing is the standardized Asterisk based SIP protocol using RTP audio streams.

A key component in all these digital voice systems is the vocoder. This is the device that converts your spoken voice to a synthesized or digitally compressed speech format.

D-Star uses Advanced Multi-Band Excitation (AMBE) from DVSI. Same $150K if you want the software source but they do offer a single chip solution for $20 single quantity and are happy to sell to hams.

The DV dongle is an important development. It was started by Moe, AE4JY and Robin, AA4RC. It contains the ability to process AMBE full duplex. Presently software applications exist to use this to communicate from a computer to a D-Star gateway. Further development are expected so that it can be interfaced to a radio's packet radio port that has the necessary discriminator connections. This may be a huge milestone. The ability to retrofit an existing repeater could be possible with this. Not only that, but you may be able to retrofit it in such a way that it can be usable in analog and for D-Star.

With the DV Dongle you will be able to use DPLUS* or the future OpenDSTAR gateway software to connect to the gateway computer behind the ID-RP2C (repeater controller). Then you will use the DV Dongle to extract the audio streams and can transcode them to standard G.711a/u, GSM, G.729, etc. and then use the Asterisk PBX power for telephone, voicemail, DID-Callsign-DID, repeater, etc. interconnection.

(* DPLUS is a gateway addon daemon that provides a number of functions see: http://opendstar.org/tools/readme.txt)

When you take a digital radio platform like D-Star, this is where integrating Asterisk could be very powerful. Since the call sign is part of every packet, this could be assigned to a direct inward dialing number (DID) or extension.

At the present time the dongle connects over the internet to an Icom gateway controller at a repeater site. So for now is a non-RF application.

What would be even more ideal since D-Star radios don't have an analog packet port is if the various D-Star radios had a digital interface port/jack to support just such a dongle / device to transcode to a SIP and codec standard. Unfortunately at this time there are no known interfaces to the Icom D-STAR radios that allow access to the on-air data stream.

I'd love it if I could buy a D-Star radio, that has an digital interface of sorts. Something along the lines of D-Star non-proprietary interface. Perhaps a mini-USB interface that perhaps transcodes to a more open standard codec like G.711 using SIP and RTP protocols (standardized protocols) so one can connect the radios together into wide area networks.

Then one would be able to have a D-Star radio in my shack also interconnected to various Asterisk powered applications in their house. Where if you weren't around to take a directed D-Star call, it could be configured as a DID to a system and use a ring group / follow me list to let the radio caller ring a home phone or leave a voice mail.

The Project 25 Inter RF Subsystem Interface (P25 ISSI) is a non-proprietary interface that enables RF subsystems (RFSSs) built by different manufacturers to be connected together into wide area networks.

It would be great to see an a D-Star radio that supports something like this on the market possibly before the P25 interface idea ever makes it to the market.

ARRL: It Seems to Us: Interoperability October 1, 2007 We need to encourage D-Star manufactures to come up with a similar style non-proprietary interface for D-Star.
0 comments