They are putting together the TV-B-Gone. I think it would have been nice to watch them test the projects too. I think a soldering contest is a rather neat idea, and I'd love to see one at the next hamfest or ham club meeting I attend :-)

IEEE Spectrum (a magazine edited by the Institute of Electrical and Electronics Engineers.) stopped by Ignite NYC, where Bre Pettis and the NYC Resistor hacker collective hosted a contest to see who had the fastest soldering iron in the city. The contestants all raced to build a TV-B-Gone kit and the first to turn off the TV won. 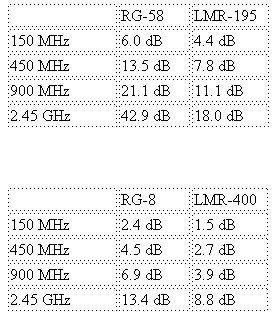 Losses per 100 ft
When it comes to experimenting with high speed data, sadly you'll likely need to do it 900 MHz and above. Part 97.307 covers bandwidth limits. While for 70 cm, 56 kbps/100 kHz of bandwidth is pretty decent, the fact is most bands below 900 MHz are already pretty crowded.

For all intent purposes, 900 MHz and above are for experimenters. If you haven't played there before, Barry, VE3JF wrote a very good UHF/ Microwave propagation primer.

What is kind of sickening is that data experimenters are few and far between in comparison to the rest of the ham community. So fighting tricky propagation on these higher frequency bands is a bit sickening while the scads of ham clubs with repeaters on very tall towers are on the lower bands where the propagation for point to point data would be better.

With that said, you'll find it's really important bet the most out of your setup. The antenna and coax are very important to this. Lets look at some coax losses.

You'll likely need better coax than you use in your normal hamming. RG-58 is very, very lossy. Fortunately Times Microwave has an equivalent size, but better performance coax called LMR-195. You'll be able to put the same type of connectors that you would normal on RG-58 on this stuff.

And Times Microwave also has LMR-400, which is the lowest loss coax, that you'll be able to fit normal RG-8 style connectors on.
0 comments

A friend brought this to my attention.

It's pretty cool, although the price is a little bit up there. The design is open, so it can be built from parts if a guy is good with surface-mount soldering:

It's a 6-chip Linux "stamp". Although it looks to be a good deal more powerful than the Parallax Basic Stamp.