The concept is increasing in popularity, due to renting or whatever the case maybe be that prevents one from setting up a home station.

Oddly enough there are very few straight forward ways to do this.

Not to long ago I detailed how to set up a web based receiver, using a Raspberry Pi, Icecast, and a CIV/CAT capable radio using hamlib:

Think; two cheap Raspberry Pi micro computers.  One with a speaker mic.  Stream with speakfreely, over a VPN, and use the hamlib php web for remote frequency control. 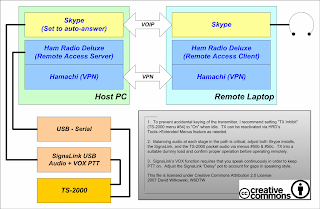 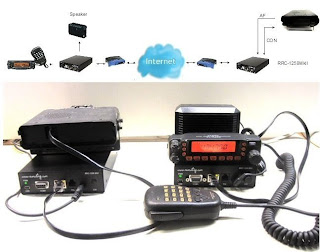 One of perhaps the most elegant ways to operate remotely is with a fairly new product (2010) from Remote Rig. The RRC-1258MkII consists of two devices; one placed at the host, and the other at the client. They handle remote control and audio. They require no computer either (after setup), just a compatible radio with remove-able head. The head connects to one device, the RF guts to the other, and just ethernet between them.

It's not the cheapest solution, but perhaps one day radio manufactures will adopt this idea of a an ethernet transport cable between the head and radio deck. Till then, ham clubs could invest in one. Many club stations see little use, and this way a number of members (some not able to afford a nice station or able to put up antennas) would benefit.

I have to say however the remote rig guys figured out the TTL communication between the head and deck and managed to encapsulate that in standard TCP/IP is truly awesome.

It even works with radios that don't have direct CIV/CAT control, like the FT-8800, FT-7800, so you don't need to own a really expensive radio to be able to use it remotely.

Perhaps in the future there will be more radios that are remotely tunable (CAT/CIV). It would be awesome if the cheaper handhelds like Baofeng, would support this. Till then, the Kenwood F6A HT works great with Hamlib.

It would be nice if future base/mobiles like the Yeasu ones would just have an ethernet jack on them.
Yeah I know, but it's nice to dream!

Here is some good info about remote transceiver operation:
http://alloutput.com/amateur-radio/remote-transceiver-operation/