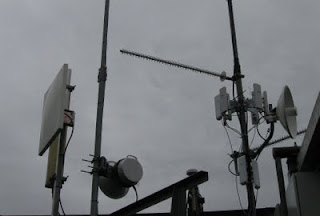 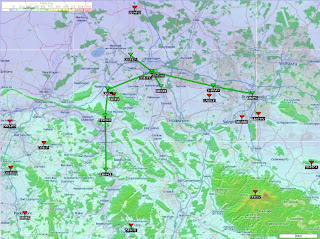 Hamnet 2.0 is a radio based network designed by German radio amateurs, which connects the already available infrastructure of the amateur radio service to each other and will provide a new powerful base for a amateur internet wireless network.

The official launch of the project and the presentation was made on the amateur radio exhibition and conference on October 31, 2009 in Hanover, accompanied by relevant lectures.

Hamnet 2.0 works on the basis of the TCP/IP protocol, so that commercially available wireless routers can be used with no or minor modifications as the hardware. In addition, a separate hardware and firmware for this application was developed. They are using the Ubiquiti WLAN module NanoStation 5 on the 6-centimeter-band (5.7 GHz).

Their situation is probably much like that over here. Sharply declining use of existing obsolete, slow, failure-prone equipment. Due to some displacement by the Internet.

The idea and hope is to support cross services (voice, images, data, video etc.) by using TCP/IP as the base. Use of affordable a technology, and setup something independent from public networks. While arousing interest in experimenting with the new technology, and developing new applications.

They started by establishing a 10 km link between DB0SHA, in Hanover, and DB0UHI in Laatzen in less than 10 minutes. This was done just by holding the units in the air, which yielded a stable 16Mbit/s connection.

They expanded faster than they initially thought. Interconnecting D-Star Relays and linking of EchoLink gateways.

They have since used this technology to replace their 23cm 19.2 k links. And have connected over 9 points, and have others planned.

Email ThisBlogThis!Share to TwitterShare to FacebookShare to Pinterest
Labels: 5.8 GHz, 80211use, hsmm