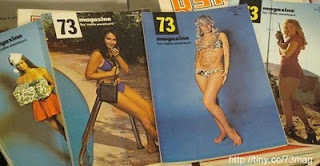 The SolderSmoke blog noticed my 73 Magazine index project a few weeks before I completed it.

It was a rather large undertaking, but worth it in my opinion. There is a wealth of timeless information in those magazines. And for many just by taking a look at the index will bring back a wave of nostalgia.

"What a great magazine 73 was! Sure, it was a bit wacky, but it had really wonderful technical content, at just the right level for truly amateur ham radio operators. Take your own walk down memory lane:" http://www.qsl.net/kb9mwr/files/ham/73.html

It is part of my effort to point out and promote what amateur radio is really about. I tend to agree with Jorge, KI4SGU's blog comment that "Ham radio needs a spokesman like Mr. Green Again." I hope the ARRL takes note.

While I have been blogging for a while, I have had recent wave of receiving email comments and feedback. I started this blog shortly before the ARRL Introduced the "Fifth Pillar" at Dayton Hamvention 2008.

While I hoped this meant a greater emphasis on the ARRL Technology Task Force or Future Systems Committee, the only thing I really observed was the We Do That Radio website that was launched.

I swapped some emails with Allen Pitts, W1AGP who manages the site after it's launch as it did catch my eye.

Science, Experimentation and Technology .... We Do That!........ with Amateur Radio.

Welcome to Ham Radio in the 21st Century, Your scientific national resource!

The Amateur Radio Service frequency bands are the place on the usable radio spectrum where you as an individual can develop and experiment with wireless communications. Hams not only can make and modify their own equipment, but can create whole new ways to do things.

The problem I saw and still see with that site is that it is geared for new hams. I conveyed this to Allen and shortly their after decided to start my own blog. There are plenty of fairly inactive hams bored with the same-old, same-old. I didn't feel the We Do That Radio site is geared for them, so this is my attempt to point out "something different."

Email ThisBlogThis!Share to TwitterShare to FacebookShare to Pinterest
Labels: 73 magazine