Kenwood TKR-850 as a D-Star Repeater 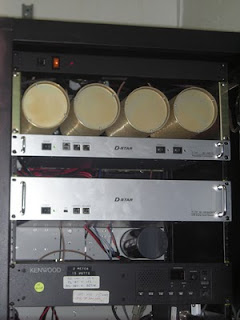 In my opinion this type of thing needs more attention. After all do-it-yourself has long been a hefty part of this hobby. And there is no better way to learn than a hands-on project like this.

Reason number two would be economics, but I think that is obvious.

The third is spectral savings. D-Star is narrowband, but buying a new system just robs another frequency pair from the pool. It seems people rarely take repeaters off the air, even if nobody really uses them. And these days it seems there are more repeaters in a geographic area, than there is activity.

So it seems best in my mind to convert something already out there. This would make a great club project.

This is great example of continued innovation of D-STAR technologies by incorporating non-Icom products into D-STAR environment.

You may want to look at;
Michael, VK5ZEA's Homebrew DV Node Adapter to ID-RP2C interface.

And/or my Motorola GM300 retrofitting and commentary.

As a technical side note, one thing to consider when converting analog repeaters is the receiver IF bandwidth. To date there has been little discussion on narrowing receivers bandwidth to match the narrower D-Star signal. Just be aware that converting a 1950's era repeater to D-Star that might have a 60 Khz I.F. would be vulnerable to adjacent channel interference. A good overview of the theory can be found in a reprinted article from Ham Radio Magazine 1985, by WD5IBS.