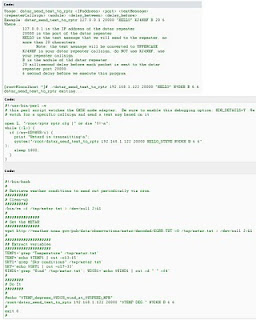 Here is a thought from a local club member that contacted me about D-Star:

The thought occurs to me that D-Star is one future standard and why not purchase a D-Star radio ahead of the roll-out? One issue is that it adds expense and why buy something today that you can’t use when the standard may evolve to something better in the future. Therefore, a waste of money now?

He actually has a good thought process. The thing I see is that since D-Star is based on the JARL standard, some parts of it cannot change. By that I mean, GMSK modulation and data rates for example. Evolve, yes it already is, and that is why I like it.

What he means is be replaced (not evolved) by something else radically different, perhaps TDMA based or what have you.

My feeling is that this is not a big consideration/fear simply because ham radio is in such a decline. You will likely never see another replacement simply because it's not on ham manufactures priority list as they market is simply not there.

Resons I like D-Star:
I've been in the hobby for nearly 15 years. I'm starting to become a been there, done that kind of guy. This is something different... a step in the right direction, to the future.

From a repeater stand-point the slow speed data & voice are not only spectrally efficient, but efficient on the club pocket book. Else you have to deploy separate APRS and voice repeater feedlines and antennas.

The framework is open so some development and evolution is possible. This paves the way for additional functionality that can be added later.

And it can be done remotely (SSH) since this is a digital system. No more spending $$ on new controllers and scheduling trips to the site to interface them.

D-Star helps attract a new breed to the hobby. The computer savvy. Which is good, since we should be one the path to software defined radio (SDR).

Some of my dislikes:

The attached images shows some starter ideas of how to add additional functionality.

One of the problems since ham radio is so stagnant is that no one really monitors. It becomes so infrequent that people are on at the same time. Those once 24/7 radio active hams are now amusing themselves with Ipods and smart phones.

So one of the script ideas report the callsigns of who is in the air to twitter. This way people know when to put down the Ipod and pick up the HT. Other scripts report current temperatures as text messages periodically.
8 comments

Depending on your point of view, Jon Lech Johansen is either your hero or adversary. To the copyright industry, Jon Lech Johansen has been a detriment to their policy of control since the advent of DeCSS (Decrypt Content Scrambling System.)

At the age of 15, “DVD Jon” wrote a computer program that allowed users to copy DVDs. Then he posted it on the Internet. A Norwegian private school awarded him a prize for making an outstanding contribution to society. The Norwegian government indicted him.

Early on; Bruce Perens, K6BP, amateur radio and open source advocate voiced concerns about D-Star’s use of a proprietary vocoder. Asking; does it really fit into the spirit of the hobby? Bruce makes a strong argument that an Open Source vocoder needs to be developed.

In May 2008, he announced that he will investigate the development of an alternative codec. The Codec2 Project: Next-Generation Audio Codecs and Vocoders for Two-Way Radio.

In August 2009 David Rowe, VK5DGR, began designing and implementing a replacement codec under the GPL.

Thomson Multimedia and Fraunhofer Society originally controlled the patents and licensing of the MP3 audio codec. Tip-toeing around the patented parts of the algorithms the LAME encoder was developed as free software application used to encode audio into the MP3 file format.

You might be surprised to find out that formats like Mp3 are actually someone's intellectual property, because the vast majority of Mp3 players and encoders don't pay royalties and are based on easily available implementations that have been out for years.

The Xvid codec became a primary free and open source competitor offering comparable quality. It too was developed by tip-toeing around the patented parts of the DivX algorithms.

Many codecs, containers, file formats and other systems have been hacked to pieces and continue to be despite being the property of one party.

GIF images (up till 2006 when the patents expired) used a patented LZW compression scheme.

PDF is owned by Adobe but has been implemented by numerous others. there are many open-source and non-approved PDF viewers, editors and creators.

Unauthorized FLV players and converters exist as well. The same can be seen with real audio, real video, various Quicktime codecs, Dolby Digital AC3, AAC, and many others.

Think about it...... Do you like your freedoms? Thank those who have taken the time reverse engineered something. Welcome those types with open hands to the hobby. Those types of experimenters are just what this hobby once was and still can be.

{Update May 2010}
Interestingly enough the Digital Speech Decoder and xMBE codec library - can decode and recover the audio from P25 (Phase 1) IMBE, D-Star (AMBE), as well as Mototrbo/DMR (AMBE+2).  The open source software was unveiled by anonymous authors in May 2010.   It seems to have possibly stemmed from the May 2008 OP25 project, that provides a software IMBE voice encoder/decoder.  APCO Project 25 traces back to the early 1990's required publication of the IMBE and AMBE codec algorithms, which of course is how both projects came about.

It is important to note that so far there have been no take-down or patent violations filed from DVSI for these hobbyist adventures.  It should also be noted that the important patent claims may expire in 2015.  Basically all patents covering the AMBE-1000 chip have either expired or are not enforceable, due to disclosures made by DVSI.  See Bruce Peren's AMBE Exposed document for further information.


It should also be mentioned that for most U.N. member states; non-commercial/research usage of patented technology is covered by exceptions on the definition of "patent infringement." Ref

Also worth reading: The Right To Reverse Engineer 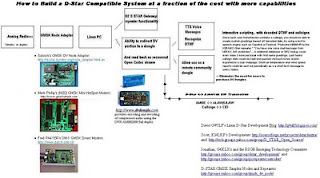 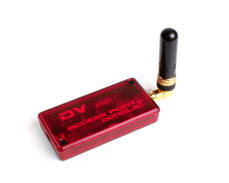 Unlike the DV Dongle, the new product allows Amateur Radio operators to walk away from the computer and transmit/receive D-STAR voice and data using a two meter D-STAR radio..... The DVAP is basically a GMSK modem with a 10 milliwatt two meter transceiver built in.

This is more crap for hard core D-Star enthusiasts. As if paying $200 for a regular DV dongle wasn't insane enough, just so you could talk AMBE over the internet using your PC microphone and speakers... now you can pay that plus the price of a D-Star radio, just to talk on the precious D-Star network.

Why in tar-nation Robin, AA4RC wasted any time designing the DV Access Point Dongle is beyond me.

It seems more logical to promote the GMSK node adapter hooked to a real retrofitted analog radio. Converting analog repeaters to D-Star at a fraction of the cost seems like something I'd get behind. At least then more than one person can use it.

This is another toy... that to me was a huge waste of engineering time. I thought Robin was going to work on a complete open replacement for the $300 Icom D-Star gateway software, hence www.opendstar.org.

All that has resulted is an add-on called D-plus, basically written to augment the DV dongle that Robin sells.

The AMBE decoder should be at the repeater end. Then users who want to talk on D-Star over their PC's can stream their voice using an open codec (no dongle) to the repeater, at which point it can be converted to AMBE with a community dongle.

Who is steering the D-Star boat? Will the D-Star newsletter ever promote such ideas? Or is it a mere advertisement to aid Icom and Robin in their financial endeavors?
5 comments