Here is the Letter to the Editor I wrote for the Green Bay Mike and Key Club, (my local club) Keyclicks newsletter in December 2008.

The thoughts in this article are that of my own, and do not necessarily represent those of the GBMK. I'll admit to having a digital interest/bias.

The Green Bay Mike & Key Club is at an equipment crossroads. The 147.12 and 147.36 are nearing the end of their 30 year life. They both do need upgrading, and I'm sure many doubt this.

But it seems there is more to it than that. It's more a question of where will ham radio be in another 10, 20 and 30 years? More importantly, where do you the members and hams of the area want and envision it to be?

My personal feeling is that one of the three systems the Green Bay Mike & Club maintains should be able to do something more that it has for the last 30 years. I feel strongly that one of these systems should at least be "digital ready," meaning that the hardware can support or be upgraded to support some digital format.

Weather that be D-Star, APCO-25, NXDN, or something else is for members to decide.

All I know is locking the community into another 30 years of the same capabilities doesn't sound very smart for the future of the hobby.

Unfortunately it fell upon deaf ears. I did receive a couple notes from people who seemed to agree or thought it was a good point/well written.

The club chose replace the 147.360 Micor with a Kenwood analog radio. When put on the spot, the reason for not considering digital was because there wasn't enough of a potential user base. Hardly any members had digital capabilities. That coupled with the question of which digital format would take over and not wanting to invest in the wrong thing.

While I can understand the reasoning. The door swings both ways. Most hams won't take the plunge and buy a new radio without infrastructure in the area. Which is also understandable.

Trying to be good spirited I even helped with a tune-up when the new repeater was moved to the Bellin hospital site. For a few weeks the excitement was high, and there was a lot of use of the new system.

So lets look at it now:

During the month of October I logged the transmitter activity on the 147.360. On average it saw less than 1 hr of total transmitter time daily.

So to me the argument that a digital counter part was not warranted due to potential use has been invalidated.

I guess the core issue here is in generating and keeping interest in the hobby. It also seems wise to not duplicate resources, but instead try something different.

For instance there are about analog 10 repeaters in Green Bay. How many hams per day do you think get on all these machines?

So I don't see how a narrow band push is logical, for the sole purpose to accommodate everyone's request to put up a repeater. 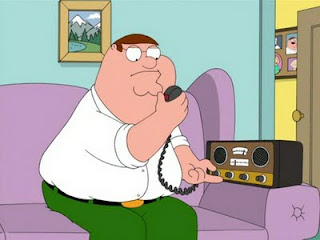 Peter goes to Quagmire’s garage sale and buys a Ham radio. He uses that radio to talk to a ghost of Ronald Reagan. Peter eventually ends up going back to return the radio.

A second way to convert an analog repeater to D-Star.

Until just recently if you wanted to make your own d-star repeater at a fraction of the cost, there was one way. That was the Satoshi GMSK node adapter.

To build this adapter the cost about $70 as compared (+ your analog radios) to the cost of a Icom RPC-2 Controller plus a RF band module at about $2900.

As one can imagine the GMSK node adapter is very popular. There are a number of other revised clone boards out there (and gmskhotspot.com)  to feed the need and address small board errors in the original design.

The problem being is that there is not always credit due to the base designer and PIC code author Satoshi Yasuda 7M3TJZ/AD6GZ. Currently, the PIC code is in a state of being re-written to satisfy that it doesn't infringe on his rights.

In this impasse Jonathan Naylor G4KLX's sound card based GMSK / D-Star repeater controller project has gained a lot of attention and advancement.
0 comments

Amateur radio must seek change - and welcome it when it comes. It is essential to seek change. When change does occur, it often comes with confusion. It amateur radio is to survive, it must not run from change, it must be prepared to run toward it. Change imposed by the digital revolution is an opportunity if amateur radio can solve the problems therein related.