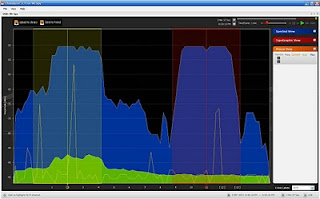 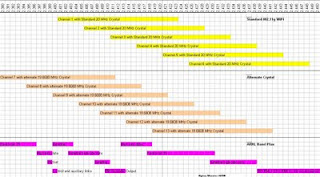 Some hams in Germany have been recrystaling Linksys WRTs to go outside of the Part 15 band: Arsene, LX1TB has modified the Linksys WRT54G(S) models to tune the frequencies below 2400 MHz for better fit with the hamradio bandplan.. Look on these German websites to get the details:

And translated version of: http://db0fhn-i.ampr.org/wrt54gs/

At the recent Ham-Com convention in Texas, Kipton, Moravec, AE5IB and Glenn Currie, KD5MFW made this chart with the data about the crystal change.

The whole screen is the amateur radio spectrum allocation in that frequency area.

The top section is the standard off the shelf WiFi. You can see that Channels 1-6 fit into the spectrum.

The second section is replacing the 20 MHz crystal on the transmitter with a 19.6608 MHz crystal (the next lowest that is readily available and costs under $1) With it we can use channels 7-11 in our band. Other countries allow the unit to have Part 15 channels 12-14.

The third section is the ARRL Band plan. he notes, because we are spread spectrum, we look like background noise to the narrow band signals.

Kipton tends to think maybe with a software change we can add those channels also and with the crystal change still be in the Amateur Radio Spectrum.

With the crystal changes, the units can not be detected by unmodified standard 802.11 devices, and impossible for them to connect.

The tests showed that by making a simple 59-cent crystal change the HSMM signals could be moved to between IEEE Channels 2-3.

Also show at the Ham-Com HSMM presentation is a spectrum analysis from Wi-SPY by MetaGeek.

The CPU clock and ethemet clocks are totally different from the radio crystal, so both units "think" they are on Channel 11. Only the crystal-modified "slide band" unit is somewhere between Channels 2 and 3 as shown by the green and blue accumulated readings. Both units were tested for about 3 hours for frequency stability, etc.

You can read more about this in the latest (Summer 2009) CQ-VHF Magazine HSMM column by John, K8OCL Titled "New Amateur Digital Video (ADV) and Revolutionary HSMM-MESH at Ham-Com."

Hi, I've been playing around with DD-WRT and saw that I could operate on channels 12,13 and 14 (With my Ham Ticket) to avoid the crush of signals on the rest of the band. I wonder if anyone has a link to "any" Atheros type driver that lets me select the frequency outside the part 15 bands? I'm using Linux now (love it!) a couple of the applications seem to be able to go to channel 14 (for example) but I can't do it with iw or iwconfig.

Sorry for the newbee question but I sure would appreciate some help. BTW built a nice little "peachcan" antenna and silver soldered a nut so I can use one of those tiny camera tripods. SURE brings in more signals which of course is part of the problem. ;-)

That might help. Everything above Ch 6 is out of the ham band. You didn't mention what hardware you are running DD-WRT on.